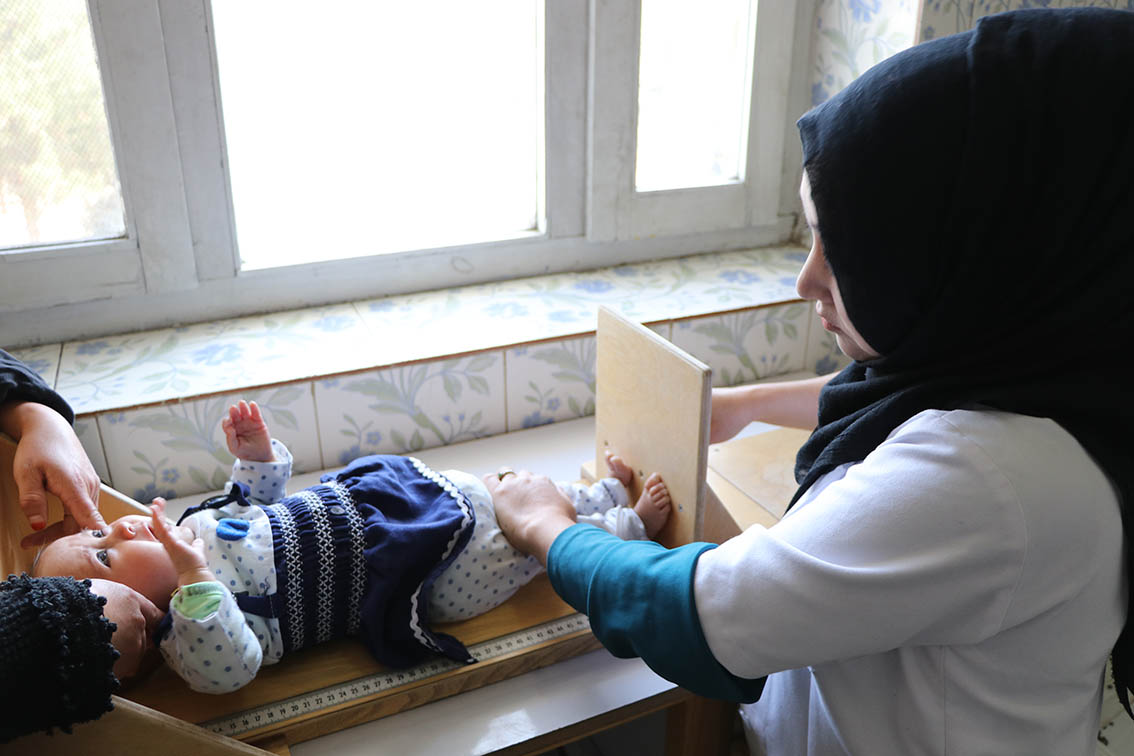 A nurse measures an infant's weight and height at an SCA hospital in Wardak. Photo: Mohammadullah Kamal

Three months after the Taliban takeover in Afghanistan, a humanitarian catastrophe is unfolding before our eyes. Poverty and malnutrition are increasing at an unprecedented speed. Without swift, pragmatic action from the international community, more people will die of hunger in 2022 alone than from violence during the last 20 years of conflict.

This dire situation is exacerbated by decisions taken far away from Afghanistan. Following the Taliban takeover, international funding to the Afghan state was immediately cut off. This was done in compliance with the US and the UN Security Council sanctions targeting the Taliban who are now the de-facto government. Nearly $10bn worth of Afghan central bank reserves were blocked by the US. In addition, donors froze development aid.

Roughly 75 percent of Afghanistan government expenditures, including healthcare, were previously directly funded by international aid. The abrupt cut-off left hundreds of thousands of public sector employees out of pay.

Many more millions who were dependent on that income were immediately thrust into acute poverty. The blow to the private sector and trade has been devastating, and the public health system has been almost entirely out of function.

Today, the economy and the banking system are on the brink of collapse. Global banking institutions will not deal directly with the central bank of Afghanistan. Mainly due to US and UN sanctions, which the European Union adheres to, Afghan banks are isolated from the international monetary system. With a few exceptions, they cannot receive money from abroad.

The US Treasury has allowed some limited exemptions. “General Licenses” from the US Treasury permit the UN and some international NGOs to make transactions for specific humanitarian activities. However, international banks remain extremely cautious to avoid the risk of being punished by the US.

In addition to the financial meltdown, there is an ongoing severe drought. According to the World Food Programme, around 40 percent of the crops have been lost this year. Roughly half the population, some 20 million people, are unable to feed themselves on a daily basis – and that number is expected to rise, according to UN agencies. An estimated 3.2 million children under the age of five are expected to suffer from acute malnutrition by the end of the year. Of those, at least 1 million children are at risk of dying if they do not receive immediate treatment.

The few citizens who have money in their accounts line up outside banks for days. Fights break out when desperate people are told there is no cash available. Their families starve. Aid organisations struggle to access their funds to pay salaries of medics and teachers, or even buy medicines or firewood to heat maternity wards.

The Taliban’s human rights record, in particular with respect to women and ethnic minorities, makes the reluctance of the international community to legitimise the regime and allow funding to the Afghan state understandable. No one wants to fund the Taliban regime. But the current over-compliance of banks with sanctions is killing civilian Afghans at a rate far higher than the Taliban, Islamic State in Khorasan Province, the warlords, former governments, and international military forces have done combined in the last 20 years.

For women, the discrimination we are likely to see institutionalised under the Taliban will pale in comparison to the effects of the collapsing economy, which risk setting their right to healthcare and education back decades. The humanitarian crisis that we have only seen the beginning of will affect the Afghan people for generations to come. As women’s rights advocate Jamila Afghani put it in a conversation with the Swedish Committee: “We are not supporting Afghan women by starving them.”

We represent European NGOs reaching millions of people on the ground. We welcome the commitments by governments that have recently been made for humanitarian support to Afghanistan. But these pledges will not be of much use if UN agencies, NGOs and the people of Afghanistan cannot access the banking system.

Studies on sanctions show that they affect the civilian population the most while there is practically no effect on the living conditions of the political elites. The US and the EU, along with the UN Security Council, should immediately review sanctions and take action to facilitate liquidity and availability of cash to alleviate human suffering.

The international community that 20 years ago promised to support Afghans in their pursuit of peace, prosperity and human rights has a moral obligation to stop its freefall towards starvation and death. And the time to act is now.

Andreas Stefansson, Secretary General of the Swedish Committee for Afghanistan.

Read the article on Al Jazeera